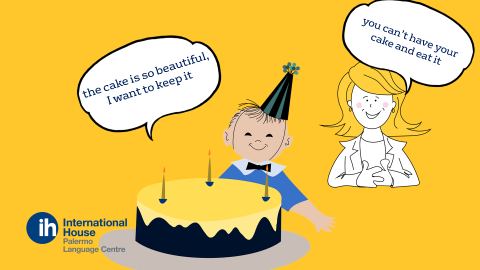 England is definitely not internationally famous for its food, but cakes and biscuits definitely get some kind of appreciation in the world!
Maybe because of this (who knows) there are many expressions and idioms related to cake and biscuits – so let’s have a look at some of them here.

1. You can’t have your cake and eat it
Probably the most common of all them. It sounds a bit confusing, but actually makes sense when you think about it. A cake is beautiful to look at, right? It also takes a long, LONG time to make! For these reasons, you often hear people say “oh that looks so nice, it’s a shame to eat it”, so that’s EXACTLY the point! You have 2 options: you can either not eat the cake (so you can continue to look at how beautiful it is), or you can eat it (in which case, you won’t be able to look at it anymore). You HAVE TO choose one of the options, you can’t have everything! What’s another way to say “you can’t have everything”... how about “you can’t have your cake and eat it” ;)
Example: “I love going on holidays and buying new clothes, but I also want to buy a house”
“well, you’ll have to stop spending so much money then... you can’t have you cake and eat it!”

2. It’s a piece of cake
This one is quite well known in different countries, but there can still be some confusion regarding its meaning. Apparently in the 1970s, people used to be given a slice of cake when they won a competition. These competitions must have been easy to win, as the meaning of the expression is “it is / was easy!”
Example: “How was the test?”
“It was a piece of cake!”

3. Icing on the cake
Cakes are great, aren’t they? Even if there is no icing, they are still great. BUT when there IS icing on the cake, it’s even more great! And that’s exactly what the expression means: adding something great to something that is already... great!
Example: Our honeymoon was the best holiday of my life, then we got home and found out that my wife is pregnant which was just the icing on the cake.

4. To sugar coat something
When you go out in winter, it’s cold, right? Sure, so what do you wear? Maybe a coat? Good idea! Imagine putting a ‘coat of sugar’ on something you eat, would it taste better? Probably yes, certainly a lot sweeter! Ok, so now let’s say I have to tell you some bad news, but I want to make it sound better, so that it doesn’t upset you... I need to sugarcoat it! However, you will usually see it used in the negative... see below!
Example: “There’s no way we can sugar coat this, it is a huge problem and we need to resolve it”

5. As nutty as a fruit cake
To understand this one, you first of all need to know that fruitcakes often have nuts in them. Ok, so that’s the first part, now let’s look at the second part... If you say someone is ‘nutty’ in English, you are saying that that person is ‘crazy’ / ‘mad’. So put these 2 things together and what do you think it means? You should be able to understand this one alone! ;)
Example: “Do you know Adam?”
“Yea, he’s as nutty as a fruitcake!”

6. Half baked
Ok, so let’s say I am following the instructions about how to make a cake and it says “put the cake in the oven for 30 minutes” that means it takes 30 minutes to bake, right? Ok, but let’s say I decide, “I think 15 minutes is enough” and decide to take it out of the oven. Do you think that’s a good idea? Probably not, as the cake will not have finished baking and I will only have ‘half baked’ cake! Used in a metaphorical way, we use this expression to say something is not a good idea and hasn’t been thought through very well... just like the idea of taking the cake out of the oven after only 15 minutes! One thing to note is that it is used as an adjective, so it will always come before a noun!
Example: “The government implemented a stupid half-baked plan to help people find jobs, but it was a total waste of time!”

7. Sell like hotcakes
Everyone loves cakes, right? But everyone REALLY loves hot cakes! There really is nothing better than eating a cake that has come straight out of the oven. Now let’s say I make some cakes and I decide to sell them at a school whilst they are still hot, do you think they would sell quickly? I think they would sell REALLY quickly! So when something ‘sells like hotcakes’ it sells really fast!
Example: “I’m thinking of selling iPhones for €99, what do you think?”
“I think they’ll sell like hotcakes!”

8. The way the cookie crumbles
When a cookie (American for ‘biscuit’) crumbles there’s not a lot you can do about it. You just have to accept that you have lost a bit of your cookie and move on with life. And that’s exactly the meaning of this idiom, something has happened that you can’t control, but you just need to accept it!
Example: “Why did the girl choose you and not me?”
“I’m not sure my friend, that’s just the way the cookie crumbles!”

10. Takes the biscuit
All of the expressions on this list have SOME kind of sense, but this one really has NONE! So let’s just jump in with the explanation: a situation is bad, then something else happens to make it even worse. This is better explained with an example though, so see below!
Example: “My boss told me that I will be paid less now and that I need to pay for the pens I use at work from now on”
“You also need to pay for pens? Oh that really takes the biscuit!”

Conclusion
So we’re not going to SUGAR COAT this, learning all of these expressions is not going to be easy. Some people might say it’s a PIECE OF CAKE, but they’re a FEW SANWICHES SHORT OF A PICNIC, or you could say they are AS NUTTY AS A FRUITCAKE. One teacher said once “just read the expressions once and you’ll remember them forever” but that idea is HALF BAKED. If someone invented a course about how to learn all of the expressions quickly, it would SELL LIKE HOTCAKES. So the best way to remember them is to practise using them when you speak and to read this article many times. We know that sounds difficult, but that’s just THE WAY THE COOKIE CRUMBLES.