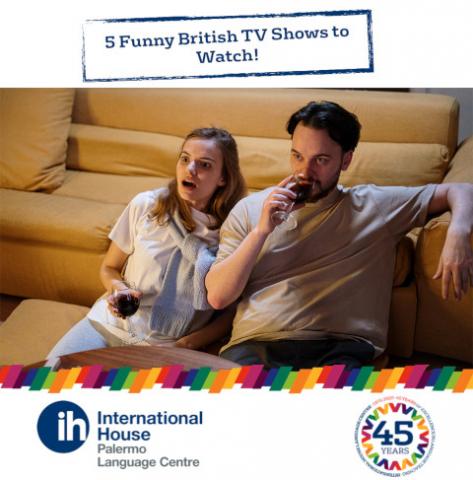 A common question that students ask is “I like watching comedy series on TV, but there are all American, can you recommend me any British ones?”
So that is what we are here to do today!

1. Fawlty Towers
This is one of, if not the most famous British comedy show of all time. It is a bit dated now, as it was made in the late 70s, but it is still absolutely fantastic. It stars John Cleese, who famously co-founded Monty Python, and he plays a hotel manager named Basil Fawlty. It may sound quite boring at this point, but you will be surprised what things happen in this hotel based in the South West of England.
You will also find an English leaner in the series by the name of Manuel, who is the Spanish waiter working at the hotel who has some difficulties understanding his boss. If you need anymore persuasion to go and watch the show, listen to what John Lennon said in 1980 “it’s the greatest show I’ve seen in years, what a masterpiece”.
Difficulty to understand: Not too difficult.
There are no long dialogues and you will understand most of the jokes just by the actions of the actors.

2. Only Fools and Horses
If you want to learn London slang, this is the show for you. It is based around two brothers, Derek and Rodney, that work at a market in South London who live in a council flat with their granddad (then later with their uncle).
The main character Derek is charmingly referred to as ‘Del Boy’ and takes care of the family, as well as family business which is working at the local market. He does his best to survive life’s struggles by avoiding paying tax and using every trick he knows to make a few extra £££.
The show ran from 1983 – 2003 in Britain and is so famous that calling someone a ‘Del Boy’ (referring to the show’s main character) has found its way into common language in Britain. If someone is trying to sell you something that you know is no good, you can refer to him as a ‘Del Boy’.
Difficulty to understand: Very difficult.
As there is a lot of slang in the show; however, if you are planning on moving to London, it’s a great way to learn!

3. Gavin and Stacey
This is probably the most similar to the American show Friends in that it is a show for all the family to enjoy. It was aired on the BBC from 2007 to 2010 and was hugely popular.
The show tells the story of how Gavin and Stacey fall in love and very quickly involve their respective friends and family. Gavin is from the South East of England, whilst Stacey is from Wales, so you will also find some cultural differences between the two countries.
Difficulty to understand: It shouldn’t be too difficult.
Most of the actors speak quite clearly and don’t use too much slang.

4. The Office
This show is quite an acquired taste, but in English it is referred to as ‘dry’ humour. Dry humour is when something funny is said or done without any change in facial expression. So it will probably be a little more difficult to understand when the jokes come in comparison to the other shows!
However, if you do like dry humour, then this is the show for you. This series is made as a documentary about a boring office in the UK than is run by the boss from hell, David Brent (played by Ricky Gervais).
The show was aired by the BBC from 2001 – 2003 and won many important TV awards. It follows the life of the employees and also has a brilliantly told love story in it.
Difficulty to understand: There are a few UK cultural references that will be difficult to understand if you have not lived in the UK before, but the language shouldn’t be so difficult.

5. Peep Show
This show can probably be classed under the ‘dark humour’ category, so if you’re into that... then this is the show for you! It follows the lives of two house mates, Mark and Jeremy (known as ‘Jez’) who live in London but have very different attitudes to life.
Mark is very responsible, reserved and has a steady job, whilst Jez is an irresponsible unemployed musician. They refer to themselves as the “El Dude Brothers” and often find themselves in crazy situations.
This is the only ‘non BBC’ show in the list. It was aired on Channel 4 in the UK from 2003 – 2015.
Diffuclity to understand: It’s not the easiest, but it’ll be a good challenge!

Final Thought:
Only watch things you enjoy, as this will keep you motivated. So have a try with all the programs and see what you like. When you watch an episode, comment on this article to let us know how you found it!