IELTS is the high-stakes English test for study, migration or work. The acronym stands for International English Language Testing System. It measures ability to communicate in English across all four language skills – listening , reading, writing and speaking – for people who intend to study or work where English is the language of communication.

Since 1989, IELTS has been proven and trusted worldwide to provide a secure, global, authentic and customer-focussed test which measures true to life ability to communicate in English. More than 6,000 education institutions, faculties, government agencies and professional organisations around the world recognise IELTS scores as a trusted and valid indicator of ability to communicate in English.

Over 1,000,000 people a year are now using IELTS to open doors throughout the English-speaking world and beyond. The test is taken every year across 80 countries, including China and it the fastest growing English language tests in the world, and sets the standard in integrity, research and innovation.

IH Palermo Language Centre was the first IELTS centre in Sicily when it first collaborated with British Council Milan in the 1990s, British Council Naples until 2017 and, IH Milan (since December 2018) and now MTS London and British Council.

The Exam venue in via Enrico Albanese 15 was custom-built for IELTS and it is the only permanent IELTS venue in Palermo.

During the listening test each candidate will have a set of headphones.

When the question is English language ability – IELTS is the answer.

In order to register for an IELTS test please contact International House Language Centre Palermo or write an email to info@ihpalermo.it. 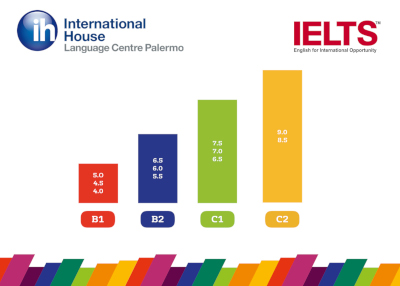