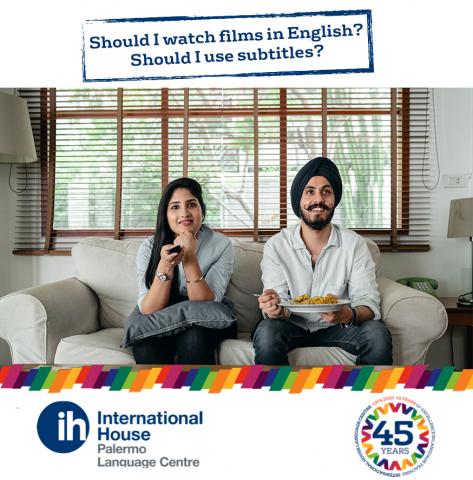 A great way to increase your listening skills is to watch TV in English. This is no secret, but many questions arise after this:

So in this article, we thought we would address these questions for you.

It’s too difficult for me to understand, what can I do?

The first thing to say here is that TV programs and films in English, like in any language, are made for native speakers. This means that there will be idiomatic language, cultural references, strange accents and everything else you can imagine to make it difficult for you.
So to be able to understand a TV program or film, you will need to have at least an intermediate level. And there will still be things that you do not understand, but don’t worry about this, as it’s all part of the process.
When a British person watches an American TV program, there will sometimes be an American sland word or cultural reference that is not understood, so don’t worry, not understanding some things is normal. Learners of a foreign language will often want to understand 100% of what they listen to, but you need to accept that this is not possible.
One good tactic is to watch a TV program / film that you have seen many times in your own language. This will help you a lot as you will already know the story. The other option to understand more is subtitles, but we will speak about that later.

Should I watch films or TV series?

This depends on what you enjoy most. If you prefer films, watch films. If you prefer TV series, watch TV series.
However, some advice for this: films are long. When you watch something in a different language, it can be tiring, especially if it after a long day at work. For this reason, often a TV series is a better option, as episodes are usually around 30 – 40 minutes and it will be easier to keep your concentration.
Furthermore, it is better to do 30 minutes every day than watch two films in a week, as it keep you ‘in training’. TV series often have many seasons and become addictive, so there can be a lot of material for you to watch!

Should I watch American or English films / TV series?

This really does make absolutely no difference. Both speak in English, so both are good to help improve your listening skills.
Obviously there are differences in pronunciation, so if you are going to move to the UK, then it probably makes sense to watch something in British English, but watching something in American English will still help you.

Should I put use subtitles? If so, should I use them in English or Italian?

This is the big question.
The answer is.... it depends.
For learners that have a very low level, it’s probably best to use subtitles in your language, as otherwise it is very difficult to understand. Watching something in English and reading your own language, isn’t the best practice, but at least it’s something. Your ear will still start to slowly recognise these sounds, so it is still something useful.
If you are around a B1 level, then it’s probably best to put the subtitles in English. It is very demotivating when you are not able to understand anything, so you want to avoid this otherwise you will switch off the TV after 5 minutes.
If you are around a B2 level, then you should be switching the subtitles off. There will certainly be things that you don’t understand, but when you have the subtitles on, you will naturally read them, so it becomes more of a reading exercise than a listening exercise. Remember that when you speak to someone, you don’t have the option of subtitles! If you do this regularly though, you will be surprised at how quickly your comprehension skills improve.

Try the different things mentioned in the article, but remember that in order to improve, you will need to ‘suffer’ a bit. So if you’re watching a TV series without subtitles and you have a lot of difficulty, don’t give up. Keep watching it and you will soon realise that you understand more than you think.... remember, you don’t need to understand every word!